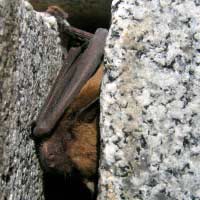 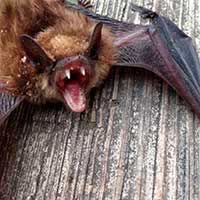 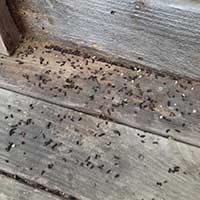 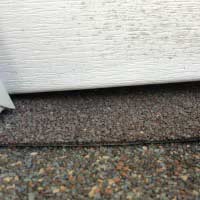 This page will Answer questions: What is a Bat? - Are Bats Dangerous? – Do Bats Bite? – What do Bats look like? - What are the signs of me having Bats? –  How did I get Bats? – How can I Rid my house of Bats? – Bats Control Tips for your home – What does Bat Control Service Cost? 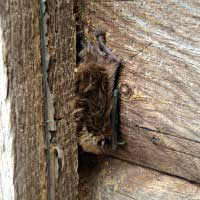 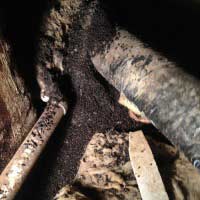 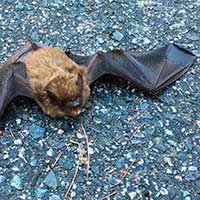 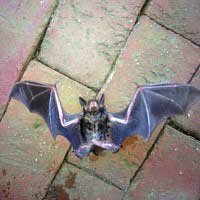 "I woke up one day to be ambushed by a bat.
Frantically, I called every pest control service around. Within a matter of minutes, Rob called me back (at 7am) and said he would be over immediately. True to his word, Rob rushed over, combed through my house and located the bat - trapping it so it could be tested for rabies. After subduing the bat, Rob investigated the source of entry. Finding a crawl space infested with a colony of bats (and a family of squirrels), Rob saw to it that the vermin was removed. He is friendly, reliable, trustworthy (left him in my home alone), and excellent at his work. I highly recommend him!”

Contacted Rob at 12:30 AM after I trapped a brown bat in my window.
He immediately answered me and agreed to come out to my house the next day at 8 AM. He did a thorough inspection of my house and I scheduled service for that Saturday. He was prompt, courteous, and did an overall comprehensive job. I would recommend him without any reservations. Thanks for making my house bat free!”

Bats are Flying Rodents very common in homes and businesses in Rhode Island and the New England Area. Bats and Bat Feces may carry disease including Rabies and Histoplasmosis. Bats are nocturnal only emerging in the early evening to hunt for insects. It is very possible that you could have Bats for many year and never see any signs of them. Bat Roosts will be in very tight and out of the way places that are hard to find.

Since some Bats carry the Rabies Virus, Bats can be Dangerous if they bite while removing them incorrectly. Bat Droppings can be dangerous because of the Fungus in them that causes Histoplasmosis, a serious Lung Disease. Than can also introduce Bat Parasites into your home such as Fleas, Mites and Bat Bugs (often mistaken for Bed Bugs). Because of these reasons a Professional Bat Expert should handle the Problem as well as all clean up of Guano Removal and Insulation Replacement.

Yes but rarely. Bats will Bite if they feel threatened. So don't try to pick one up and you should be ok. If you need a Bat Exterminator, we actually don't kill the Bats but give them a Humane way out of your structure for good.

Bats, or the most common in Rhode Island the Big Brown Bat. Big Brown Bat bodies are about five inches long, not including the tail, and they have a wingspan of up to 13 inches. Big Brown Bats have a thick brown fur. Their wings are black and have no fur. They weigh about half of an ounce. In Rhode Island there are approximately 8 species of bats: The Big Brown Bat, silver-haired bat, eastern red bat, hoary bat, eastern small footed myotis, Little Brown Bat, northern myotis, Indiana myotis and the eastern pipistrelle. The most common bat in Rhode Island is the big brown bat. The Big Brown Bat is a relatively large, robust bat with a broad nose and fur that ranges in color from light rust to dark brown. Big Brown Bats are commonly found in houses and other buildings. Small Beetles are their most frequent prey yet big brown bats will consume large amounts of night flying insects, including Mosquitoes. Bats are the only Mammals capable of true flight. The big brown bat can live up to 30 years. Two diseases can be transmitted to humans from bats Rabies and Histoplasmosis. Rabies is a viral infection of the central nervous system. Anyone bitten by a bat should immediately obtain a post-exposure treatment. Histoplasmosis is a respiratory disease caused by fungus that grows in warm humid conditions around bat droppings. Avoid breathing the dust around Bat Droppings. If droppings are present and there are no obvious openings. Bats sometimes roost on porches or under eaves briefly during the night while they digest the insects that they have eaten. To survive the winter some Bats Migrate, other Bats Hibernate, and yet others go into Tupor (regulated hypothermia that can last from a few hours to a few months). Bats can enter a home from a gap 1/4” x 1 ½” or a hole 5/8” x 7/8”. In the warmer months a bat may crawl from an overly hot attic through the walls and end up in the living quarters of the house. Cobra Pest Control offers a FREE Bat Inspection and evaluation. Cobra Pest Control is usually much more affordable than most companies. Often saving the customer 100’s to 1,000's of dollars. Rob is a “Great Bat Inspector”. Let him give you a “FREE Bat Inspection”

How did I get Bats?

Bats enter your home at night through openings as small as a 1/4". Bats in your home is really just the luck of the draw(In this case bad luck). Your attic may be warmer than most through the winter that lets them have a better survival rate.

What are the signs of having Bats?

One sign is noises in the attic. Next would be the droppings found outside on the roof, under the eaves, on the ground under the eaves or in the attic. Bat Droppings or Guano, are larger than a mouse dropping, closer to a Rat dropping and it can sparkle slightly in the light. This is from the wings of the insects it eats. Most companies do not do Bat work and I have seen many Pest Control Companies set Mouse traps or put out mouse bait. Bat Control Services can be tough. You need a Local Bat Expert.

How did I get Bats?

Bats enter your home at night through openings as small as a 1/4". Bats in your home is really just the luck of the draw(In this case bad luck). Your attic may be warmer than most through the winter that lets them have a better survival rate.

How can I rid my house of Bats?

Bat Work requires a lot of ladder work and going on the roof. Also it is frowned upon to kill bats, so the solution must be humane. Bats are very important to our environment. It is best to use a Pest Control Company

What does Bat Service Cost?

What does a Bat Job cost and what do other Companies Charge?
I have seen some priced (from other Companies) over $2,000. These are jobs that I priced much less than $800. Their are a few so called Bat Service People who will also charge you to put out moth balls or other worthless repellants. I recommend that you always get at least 2-3 estimates. Cobra Pest Control is a one man operation with very little overhead. I have no salaries to pay, no commisions, and I personally do all the work myself. So I know it will be done right the first time. Go with price, experience, and what your instincts about the technician tells you. Ask ALOT of questions. DO NOT pay for a Bat Inspection.

Bat Control Tips for your home