Wasp Extermination can be very effective with the proper Wasp Products and Inspection. The hard part is finding ALL the Wasp Nests, they can be in the open or hidden. You can have one Wasp Nest or twenty. 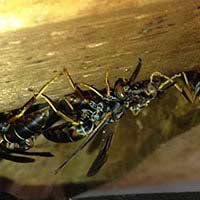 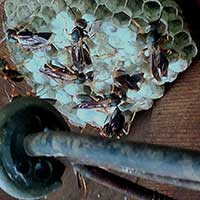 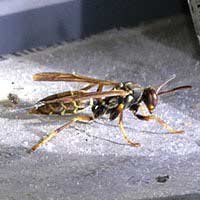 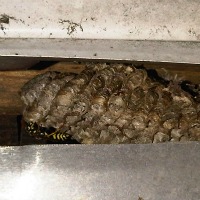 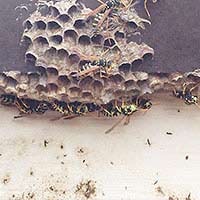 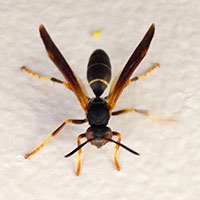 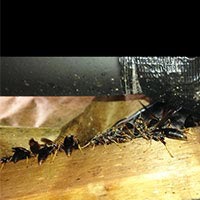 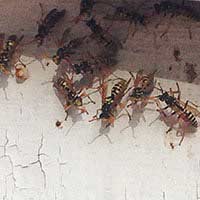 Cobra Pest Control offers “Wasp Elimination” for much less than any other “Wasp Control Company” and gives a “One Year Wasp Control Guarantee”. Rob will not try to sell you a long time service contract that you do not need.

Since Cobra Pest Control is a local one man operation and Rob Sullivan with over 28 years of “Wasp Extermination Experience” who does all the work himself, “Wasp Control” is done right the first time at a much better price and “Wasp Guarantee”. Cobra Pest Control has no managers, technicians or secretaries to pay or other expenses that the bigger companies pay. This cost saving is passed on to the customer.

"Showed up at appointed time.

Explained procedure plus information on other pest control needed in home. Finished procedure in record time. Supplied quote for other needed pest control same day. Showed all insurance, licenses, etc. Would use again. Friendly and knowledgeable.”

“No more Bees,
Rob thank you for giving me peace of mind”

Wasps are Social Insects with a Caste Hierarchy, typically a Queen Wasp who only lays eggs and Workers Wasps that do everything else. They live off other insects, primarily Spiders. Wasp Nests are built from wood fibers, producing a paper like shelter. The Paper Wasp commonly builds its nest under the eaves of houses or under porch roofs. If a Large Wasp Colony is disturbed, they may respond by releasing more than 100 Defending Wasps, each capable of delivering several stings. Wasp Venom contains factors that release Histamine, which dissolves red blood cells. Most people can survive many stings, responding with only temporary pain and swelling. Paper Wasps, Yellowjackets and Hornets are all Wasps. Their is also Mud Wasps that build a mud nest and lay their eggs inside. Most of these are Solitary Wasps. Paper Wasp Nests are started in the spring by a solitary female that was fertilized the year before and survived the winter. All the offspring are females and not fertilized. Females do all the work building and expanding the nest. Males are produced towards the end of summer. All males do is eat and help in the reproductive work. Sounds like a great life with the exception that they have no stinger like the females and they don't live long.

Paper Wasps have yellow and black stripes. They make the unenclosed, Cauliflower like Nest. Their bodies are easily seen as segmented; head, thorax and abdomen. The legs dangle when in flight. Their are many types of Bees, Wasps and Hornets. They all look different and they all have different habits, diets and preferred nesting areas. They are about 1/2” to 3/4” inch long in a variety of colors and shapes.

Yes. Wasps Sting. In fact they can sting multiple times because their stinger is not barbed like Honey Bees and will not come out. Wasps do not usually sting unless they are bothered or if it feels the nest is threatened. Unfortunately most Wasp Stings are caused by inadvertently getting to close to the nest and not realizing it.

What are the signs of me having Wasps?

The obvious signs of having Wasps is seeing the Wasp Nest which is a cauliflower like papery nest or a small number of Bees in a small area (alive or dead). Wasps Flying in and out of an opening. Sometimes a slight sound in the wall like buzzing or a hum. Certain Bees will dig through the drywall or sheetrock to gather the paper backing to make their nests. They can enter the house through these areas. This usually means the nest is very close and will be attracted to the light.

How can I rid my house of Wasps?

It is relatively easy to get rid of a Wasp Nest if it is accessible. The nest is so small and if you wait till dark when all the Wasps are back for the night. Spray it with any over the counter product (check the label) and then just knock it down. If it is inaccessible, large, or up high and if you do not have any protective gear just call a Professional Wasp Exterminator like Rob from Cobra Pest Control.

How did I get Wasps?

Wasps like to Nest in out of the way places. Under the eaves, between the rain gutter and the facia, in attic vents and between roof shingles or siding. Once there and as the nest grows and the weather gets hot or cold they may enter your home .

Wasp Control Tips for your home